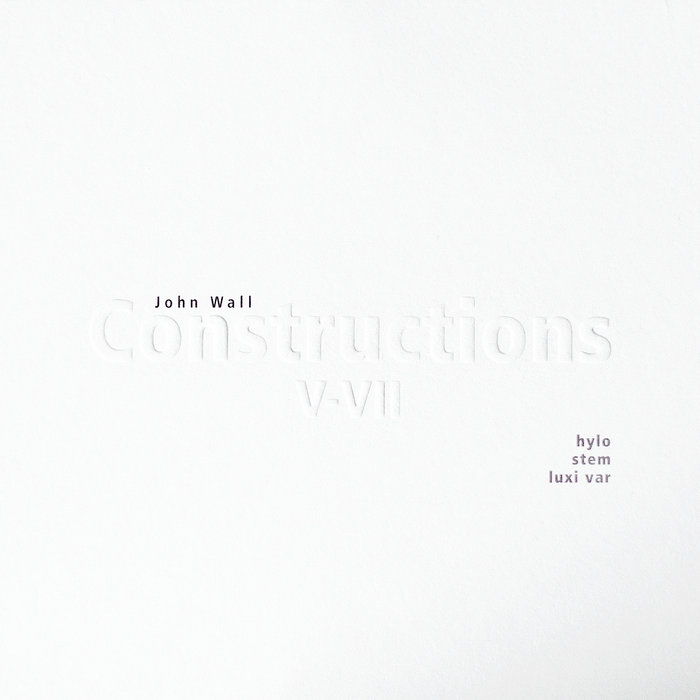 ConstructiosV-VII was self released in 2001 on the Utterpsalm label.
Mastering by Simon Heyworth.
With the exception of "Luxi Var" which have contributions from John Edwards (bass), Mark Sanders (percussion) Andrew Sparling (clarinet), the weaving of acoustic instrumental sound into the compositions has become almost non existent.
Having said that the three pieces should be seen as a sequel to the previous release Constructions I-IV which came out in 1999.

The opening track breeds characteristic active attention as the evolving electronic particles achieve form through carefully built relation. The precision focus into momentary morse code adds potential figural shape to the intrusive sound bass plunges and the act of listening is drawn into one of visualisation: barren post-apocalyptic vistas, screens blinking to the pulse of the military/industrial complex. These are already overdetermined, but certainly, as has been said before, the cinematic feel of this sound is unavoidable, bringing with it a further investment in tension as the minimal tones sit lying-to-attack the attention induced by the underlying drone.
An organicism intrudes massively from the beginning of the second track: achieved from a synth-generated pulse, left as it were to find its own way blind. Again, such figuration is encouraged, and added to by breath-like modulations, unsurprising given this CD's initial conception as opera. There is nothing restfully ambient in this focus however, for this is a heavily bruised sound, morphing by contortion. Working in opposition to it however, is the fiercely imposed minimalism of sharp, incisive tones already apparent in the first track to which it eventually succumbs, creating a sound field of increasingly chilling sparcity.

Given the over-arching minimalism of the first two tracks, the cymbals that crash open the final track generate a flooding richness of impact by juxtaposition, one that is strongly maintained as its ripplings are meticulously charted out in a manner reminiscent of the earlier 'Fractuur' CD. Carrying these is a shining, airy drone that gives a further indication of operatic context. The drone works to particularise a huge range of metallic timbres into active-listening play, with the later introduction of stone and crystalline textures. Voice is materialised in the gestural physicality of improv sax breathnotes that in turn morph into a signature fragment from Constructions II, to confirm these pieces' extension of that particular exploration.

This signature fragment is, as it were, the sonic form of that most difficult of existential pivots, Beckett's 'I can't go on, I'll go on', and provides the core of the minimalism that rules these three pieces. This is the ground that the fragments and the relations built between them have been allowed to work their extension from, and at times it makes for difficult listening. Given the work's constructive process, the minute piecing together of sampled fragments, the kind of sonic reductiveness often apparent here is risky, raising as it does the spectre of that process becoming victorious over the products it is achieving. What saves them from this fate ultimately is the trained attention of this composer's ear, that continues to promote the differentiation of a wide array of sonic occurrences, which however minituristic, signal necessary innovations in a field increasingly occupied by legions of laptop soundalikes.
Rob Holloway

Bandcamp Daily  your guide to the world of Bandcamp