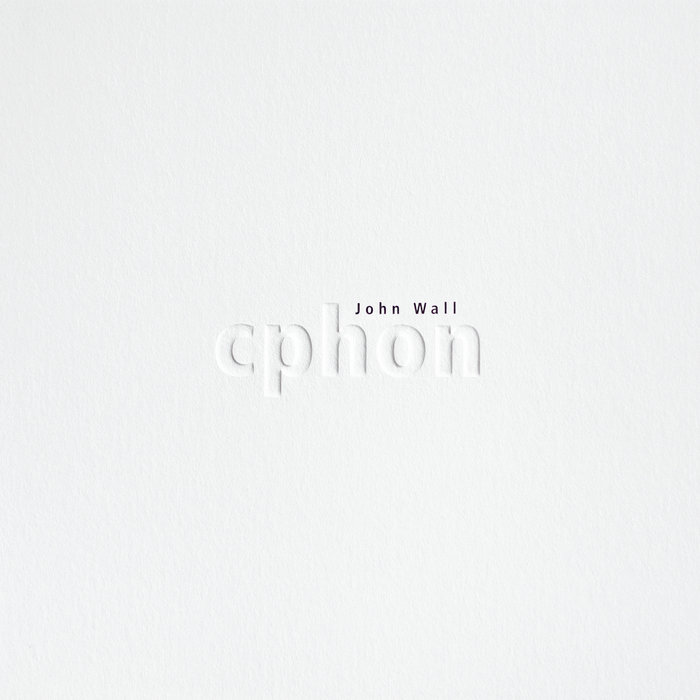 Cphon was self released in 2005 on the Utterpsalm label.
Mastering by Simon Heyworth.

This single composition, lasting slightly over its 20-minute pre-set constraint, comes up just short of Wall’s longest piece to date, ‘Fractuur’. Given its constructive process: the patient and precise piecing together of thousands of heavily worked minute samples, each one with the potential to exert a generative pull on the caring listener, demanding listening is our diet here. The reward: an intense engagement with a bizarre and various compositional soundfield whose restless agitation hallmarks this composer’s work.
You could take as your initial, unlikely guide into the piece the sustaining, dim, cricket-like pulsing that arises early, establishing a potential frontal focus to allow an array of other sound sources to poke out of inner sides and ceilings. As accomplice, its polar opposite: a breathy pipe-blow whose alternation with our cricket-pulse establishes both as the boundary markers within which the characteristically wide sonic field can emerge. Characteristic too is the attack-action of certain sound events: a globular throb whose full growth the end of the piece awaits, and again in opposition, crescendo sharpenings to electric glass motes. These, together with the odd polyp and lip-fizz, represent what remains an essentially minimalist terrain, one that tempts layers of impression to accumulate on whatever does arrive: could we, for example, hear that original cricket-pulse as bcoming something like a trace of our waiting time? Anticipation grows an attention’s slow gather, one made more urgent by the vicious action of a sudden slice, or by increasingly dense, upper pitch ticks and clickings.

At eight in, coming on the end of one of those crescendo sharpenings, we suddenly have the presence implied: no glass mote, but rather, unbelievably by juxtaposition, a piano, huge (it’ll prove over 6-minutes tall), that seems to be more testing its growpen’s limits out than actually being played. It alerts most for the sheer, brutal, but weirdly welcome, acoustic sound that it is amidst this sparse electronic outerzone we’ve been drawn by polite hijack into. Ludicrously, I feel I’m watching a dinosaur eating trees but then mirage-like, over time, its strong stridencies begin to suffer muffle, harsh swervings occur it into a glacial metallicism until finally it regresses to laboured, insistent, heavy stubs; the descent unstopped by occasional back-bells and electric-excites working as if to re-animate its initial tonal range and vibrancy.

You could hear the hilarious comic quacks that duck in late on as perverse representations of what now lasts for life here as, in the final section, an engineered phase shift intrudes a kind of 4-wheel boulder roll, whose banal, grubby, indifferent ‘progress’ inevitably absorbs all the minute variations that are this work’s living cells. Looking back, one might want to trace its beginnings in the corrosive viral action enacted on the piano, an action that has now morphed into this bizarre hybrid drone, biologic in action, geologic in rhythm, that signals destructive ends minutes before the composition’s final ping. A concluding dystopic mood then, but having become deeply implicated in the action of the composition’s process, we might now be able to say that it is a mood whose strength of intellectual pessimism is vitally matched by an optimism’s will to build amidst these sonic ruins. Which leaves us where we’d perhaps hope to be: necessarily and freshly agitated.

Bandcamp Daily  your guide to the world of Bandcamp